Residents of Diepkloof Zone 3 in Soweto have barricade the Soweto Highway near the N1 with large rocks and burning tyres as protests over power cuts intensify in the area.

On Monday morning, dozens of protesters gathered near the highway and blocked traffic with more tyres and heavy tree branches.

Several motorists driving on the Soweto Highway were seen turning back to the N1 as they could not travel on the barricaded highway.

The protesters told Sowetan they took to the streets because they have not had electricity for almost two weeks.

Resident Shimmy Bopape, 45, said there were people who paid for electricity and they are negatively affected by Eskom’s alleged decision to cut power to all households in the area. 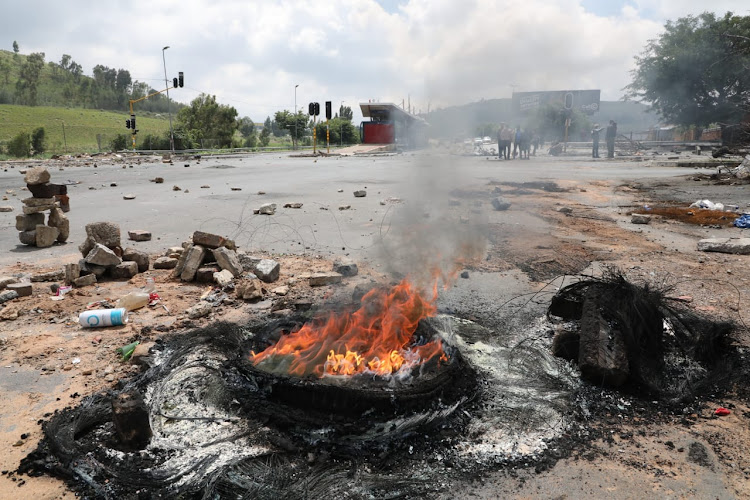 “Eskom undertook an operation to switch off the electricity for all households. That is not fair. Households are different. There are people who use a prepaid electricity system and others receive a monthly electricity bill. So Eskom should identify the culprits and deal with them and leave those who are compliant and paying,” said Bopape.

“Eskom introduced a new system to buy electricity in our community. Eskom started a project to install prepaid meter boxes in our households but that project is not complete. They have not completed their project and they are now punishing us. We cannot buy electricity on the new system because it is not finished and we do not know how it operates,” said Lefutso.

Lefutso said  with the old system  they would go to a local Eskom office and buy electricity there.

Ntsako Ngobeni said they will continue with their protest until the relevant authorities come and engage with them.

“We started this protest this morning around 4am. We are not going to stop. We are going to continue until we get electricity. We want Eskom, the mayor [Mpho Phalatse] and premier [David Makhura] to address our issues,” said Ngobeni.

The N1 has since been reopened for traffic to flow between the Soweto Highway and Diepkloof interchange.

Meanwhile, the Chris Hani Road in Pimville and Klipspruit has been reopened for traffic to flow after an earlier closure due to service delivery protests.

This is a developing story.